The amazing ancient art Museum is situated precisely in the core of Ortigia, just close to Piazza Duomo and Arethusa Spring. It preserves the huge painting of Antonello da Messina “The Annunciation”, depicted on board in 1474 then transported on canvas, painted for the Church of Annunziata in Palazzolo Acreide.

THE HISTORY OF PALAZZO BELLOMO

The Gallery was founded in 1940. The collection of the National Archaeological Museum of Modern and Medieval Art was moved into Palazzo Bellomo to valorize and promote the incredible artwork coming from churches and desecrated convents of Siracusa and other location in eastern Sicily, and from purchase orders and donations.

The museum documents the evolution of figurative culture in Siracusa, and in the south-eastern area of Sicily.

The museum illustrates the developments of figurative culture in Syracuse and more generally in the south-eastern area of Sicily. 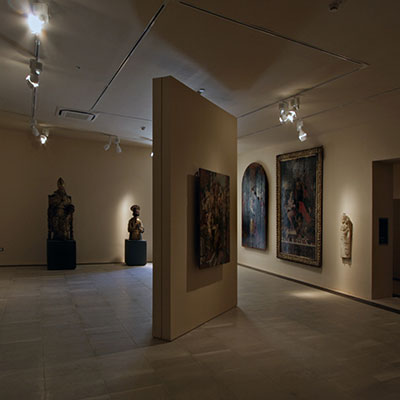 The collections of Palazzo Bellomo Gallery are significant and have an exceptional value.

The painting of Antonello da Messina is one of the most famous and interesting works of its professional path, it represents the perfect balance among Flemish painting components, clever use of geometrical perspective and huge dimensions typical of the classical Italian Reinassance style.

In the same room, are displayed two sculptures with a stylish pose and a gentle expression, attributed to Domenico Gagini; then an important illuminated manuscript made by unknown author dated to the 15th century Flemish production, and a beautiful tombstone dedicated to Giovanni Cabastida (governor of the Regional Chamber).

The museum’s paintings collection is very rich of works. Note for instance, the Madonna Entrhoned with Child between the Saints Eulalia and Caterina d’Alessandria realized by Pedro Serra; he was a Catalan artist of the 14th century, who showed the Valencian-Catalan art influences found in Siracusa.

And more two important works of the 15th century: two panels of Saint Lorenzo and its life’s stories, renowned as San Lorenzo Retablo, and six panels of Jesus transfiguration that formed a polyptych. 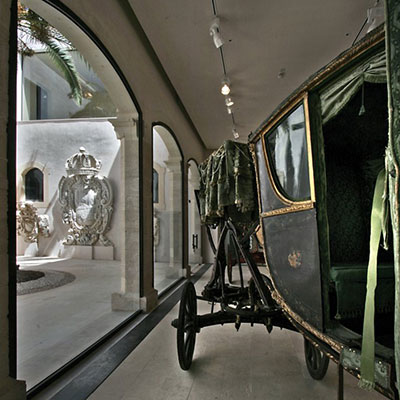 The canvasses of the late 16th century are by Mario Minniti, Syracusan painter whom was strongly influenced by Caravaggio. The two men built a friendly and work-based relationship in Rome, and when Caravaggio fleeing Malta was hosted by Minniti in Siracusa in 1608.

Then the painting of the Immaculate and Saints Chiara, Francesco, Antonio Abate, Barbara and Maria Maddalena is by Guglielmo Borremans. He was born in Antwerp in 1672, but due to its artistic compositional vivacity he gained great regard in Palermo and in all Sicily.

The Regional Gallery is very rich of Sicilian icons, works of Cretan-Venetian and Slavic painters so-called “Madonneri”, dating from the 16th to the 18th centuries.

Wonderful piece of Norman mosaic technique is the marble tablet with lions, related to Islamic depictions and similar to those beautifully represented in the Palatine Chapel in Palermo.

Moreover in Palazzo Bellomo there is a significant exhibit of Christmas Crib statues made in wax, ceramic, stucco and papier-mache with a particular historical and artistic value, dated to the 18th-19th century.

It’s also exposed a plan of Ortigia composed by five wooden and cork-based panels, accurately depicted with roads, fortifications, civil and religious buildings, and urban changes following the earthquake of 1693. This floor plan was and is part of a ten strongholds models series realized by cartographer and collector Giovanni Carafa, commissioned by Carlo of Bourbon King of the Reign of Naples.