A CHURCH, A TREASURE

Santa Lucia alla Badia Church is located inside the core of Ortigia, just close to the Duomo, and it represents a perfect architectural combination, a great blend of cultures and shapes, where the late Baroque style fits in well with the Spanish-style architecture and the impressive painted-ceramic floor.

Construction date of the Church and its Monastery is unknown, but sources confirm convent’s existence already in the middle of the 15th century.

The Church has always had an important place in city life either for its position in Ortigia and for its connection with the Patroness Saint of Siracusa, Lucia; her iconographic symbols are carved on the magnificent Baroque facade.

Inside the Church are treasured works of extraordinary artistic value, such as the Burial of Santa Lucia painting by Caravaggio and two wooden Crucifixes dating back to the 14th century.

The floor has been completely restored according to the 18th century original decoration, that consists in quadrangular majolica-painted tiles.

The new facade is entirely made of clear limestone and it develops vertically; it is characterized by a wrought-iron balcony that divides the front into two levels. But the current balcony is not the original one, which was dismantled during the Second World War for military purposes; it was taken from another site, cut and adapted to the church even though the balcony’s symmetry axis does not match with the facade one.

The magnificent Baroque doorway is flanked by spiral columns and topped by an arched pediment in which have been carved the symbols of Santa Lucia martyrdom. These elements are repeated on the front twice, maybe to make clear the crest from different points of view.

On the side bands stand out the symbols of Spanish Kings.

The floor-plan consists in a single broad rectangular nave, closed by the presbytery that is topped by a dome.

The church is divided into two separated areas: the nave and the apse.

On the side walls of the nave stand 12 projecting columns with 4 Baroque altars, and it’s decorated with stuccoes; the apse is an octagonal room as large as the nave, with the altar settled in the middle.

Works of embellishment and enrichment were done in 1783, such as the decoration of the vault with a huge fresco depicting Santa Lucia miracle of 1646 which occurred just inside this Church: it is said that in a period of severe famine, a large crowd was gathered in prayers to the Patroness Saint; right after, a dove alighted on the bishop’s Chair announcing the arrival of ships with wheat and legumes, which provided their cargo in return for hospitality.

Since then it’s celebrated the festival commonly known as “Quails of Santa Lucia” (Santa Lucia delle Quaglie) every first Sunday in May. Festival name derives from an ancient tradition: during the Holy day the nuns used to free doves and quails from Church’s balcony.

Currently the whole complex is different than the ancient one. After the Second World War the structure was badly damaged, so was partially demolished and restored.

For example, the flooring compromised due to dampness was replaced in 1970, of course inspired by the original Baroque floor. 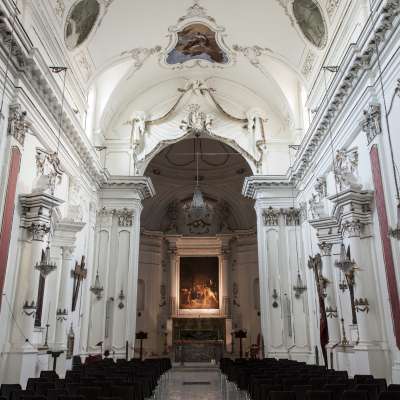 Caravaggio spent in Sicily the last three extremely tragic years of his life. On 6th October 1608 him already walked away from Malta, and arrived in Messina on 6th December 1608. During this brief period Caravaggio was commissioned to paint the Burial of Santa Lucia for the Church of Santa Lucia al Sepolcro in Siracusa. The master-work was realized in just over a month. 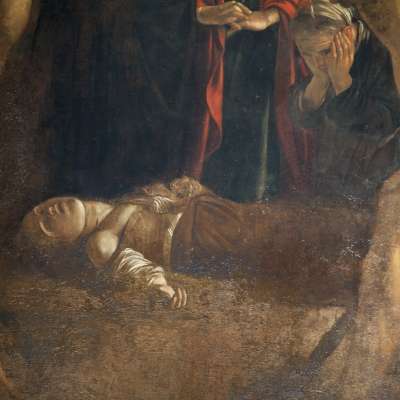 THE BURIAL OF SANTA LUCIA

It is possible to define this work as autobiographical, the artist is trying to bury his tormented pain with the Saint’s body. The painting presents a dark atmosphere, the predominant tone is a rust-colored texture that is the same color of the ground in which Lucia is buried, while the light is very little.

The painting is characterized by two movement lines: a diagonal which descends from bishop’s mitre towards the lower left figures; the Virgin lying on the ground is the only horizontal element.

In forefront stand out the two undertakers.

A boy in a red cape stands in the middle of the painting creating an upside-down T with the Saint’s body: color red is for passion and blood, and it is the only bright shade between all dark tones.

The background figures are troubled and surely the women are Lucia’s mother Eutichia and her nurse: one has her face turned on her left hand, and the other hides her face in her hands.

Caravaggio has decided to change just one element: bishop’s pastoral spiral was turned to right outward the picture; in the definitive version he turns it towards inside figures, in order to close the painting.