ORTIGIA ISLAND, A JEWEL TO DISCOVER

The island of Ortigia, a heritage of humanity and heart of Syracuse

Quails’ Land, refuge of gulls, quiet harbor or simply U ‘Scogghiu (the rock), as it is called by its inhabitants, the island of Ortigia takes over the centuries different names and titles, which always leave intact its identity as a welcoming place.
During their millennial processes, the Sea and the Sirocco wind shaped its landscape and molded its character, marking the destiny of this part of Sicily. Situated in a halfway between East and West, between Carthage and Rome, Ortigia welcomed Greek and Christian ships in the arms of its port, and that’s why along its labyrinthine alleys and through its many squares, you can live a unique experience and breathe the scent of the Mediterranean Sea.
‘Discovering Ortigia‘ means come into contact with different cultures, but above all to know Sicily in its most intimate aspects. Palazzi, courtyards, churches and monasteries give way to temples, castles and fountains, composing a fine white stone mosaic, which precious tiles shine in the sun. 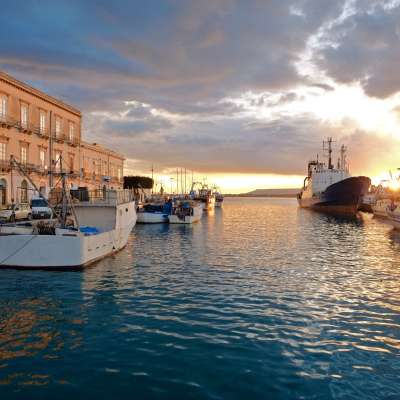 Porta spazio-temporale, tra cielo e mare, è il ponte Between sky and sea, the Umbertino bridge is a space-time gate that connects the island to the mainland. After crossing it, you are immediately impressed by the size and the beauty of the monolithic columns of the Apollo Temple, that as stone trees reveal the Greek roots of the city.
Here begins one of the many interesting tour around the island, leading you from the buildings in Fascist Era style along Corso Matteotti, to the feet of the Goddess Artemis, shown at the center of the fountain in Archimede Square.

The route ends under the gilded shield of Athena, whose memory is still living among the aisles of the ancient Cathedral in Piazza Duomo. Here you should not miss one of the masterpieces of the 17th century art kept inside the Church of Saint Lucia alla Badia; from the main altar Caravaggio tells the story of the patron saint of Syracuse, revealing to the observer the secrets of the underground city.
The Ortigia’s soul lives, in fact, underneath its monuments, where you can see the traces of the first inhabitants of the island, still visible inside the Artemision (the Ionic Temple).
Moving away from the square and along the narrow streets, the architecture reveals the wounds of time. If earthquakes, during the centuries, scarred the beauty of the Island, in the 18th century Ortigia reborn and it was surrounded of stone leaves, columns, pinnacles and spirals; it wore the fine Baroque mask that characterizes it still today.
At Sunset the face of Ortigia is pink, orange and deep red, its streets are crowded with visitors, and the curtain goes up on the 18th century auditorium of the Municipal Theater of Syracuse. 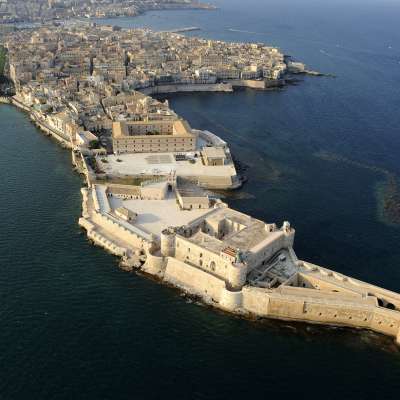 ut Ortigia’s Island is not only a complex of buildings and monuments, it is a real urban theater, which soul is the essence of the city: an essence made up of ideas, words, traditions, lights and aromas.
The island is its market, full of exotic fruits, umbrellas and spices; but it is also the Sea with its traditions.

From 2750 years Ortigia wears the light blue, color which was stolen from the gods to protect Aretusa, the nymph with which the island is identified, and to dye its crystal waters. Water is its element, it is the first thing you notice coming into Ortigia and the last one you see leaving the island.